My husband Joe and I went to our ET+4 (4 days past due) check-up with Chris at the Geburtshaus on the third Sunday of Advent, December 14. I had gone for a walk in the morning and saw two birds take flight upstream and the creek behind our house. I’m horrible at identifying animals (in my defense I am a microbiologist), but I could swear it was a pair of storks. I told Chris about it as she gave me acupuncture although we all agreed they should have migrated south for winter. While the needles were in I had a period of sort of a dizzy sensation in my body, and I hoped that these were collective “signs” our baby would come soon. My husband had taken vacation for the rest of the year, and after a week at home he was getting anxious for the baby. It was reassuring for me to know that he was also now mentally ready to welcome our first child.

Nevertheless, I woke up early the next morning and started worrying that our baby would not come until Christmas, as both my husband and I were born 1-2 weeks late. My parents were set to arrive on the 20th from the USA to meet their first grandchild, and I really hoped we would be able to have a bit of time to have the baby and form our new family unit before their arrival. At some point in my tossing and turning in bed, I noticed that my normal Braxton-Hicks or “practice” contractions had become slightly painful – more like a menstrual cramp. I thought it could be something, but didn’t want to get my hopes up. I slept a few more hours, periodically awoken by a contraction.

In the morning, my now painful contractions had become pretty irregular – occurring every 10, 15, 25 minutes or even longer, but were also quite weak and short (about 20 s.). I went for a very long walk, hoping to stimulate more contractions, but things seemed to have tapered off. After returning I ate a hearty early lunch and laid down for a nap to make up for a wakeful night and to get some rest just in case things picked up. Around 12:30 I woke up to more contractions, although they were still pretty weak, short and irregular. At 13:30 I called our midwife Chris to let her know that my contractions had changed overnight and were now picking up again, and we made a plan to meet at the Geburtshaus at 18:00 for a check-up. I set myself up on the couch with a movie, the woolen diaper cover I was working on, and timer and notebook to collect data (I’m a scientist and my husband is an engineer – we love data!). By 15:30 the contractions were pretty regular, every 4-7 min. My intestines had been busy cleaning themselves out in response to the contractions, so I went upstairs to clean and up and get the last minute items packed. Joe had already packed the car earlier in the day, hoping this was it, but when I was moving my contractions intensified and I confirmed to him that this was indeed “it”.

Shortly before 18:00, I used the window (now 3-5 min.) between contractions to get back downstairs, then down the outside stairs and into the car, which Joe had mercifully warmed up. We set off and I realized we forgot the baby’s bag. Joe retrieved it, and we headed toward the Geburtshaus, thankful that evening traffic was backed up in the opposite direction, draining out of Tübingen. After waiting out one contraction I hurried inside in the break between contractions. Standing at that point was just too risky, as it really increased the intensity of my contractions. Chris, listened to the baby’s heart and checked my dilation as she filled the tub. I was at 3 cm and opened to 4 cm while she checked. It took awhile to figure out how to sit comfortably in the tub, but during every contraction I squeezed Joe’s hand or leaned on him for support. I had read Ina May Gaskin’s Guide to Childbirth during pregnancy (she is a legendary US midwife), and used her advice to keep tension out of my face, neck and lips, and bottom during the first stage of labor, and express the pain through sound and tension in the arms. Chris helped us to reposition me so the contractions would be more productive. I hung on the cloth strap above the tub for some, and stood with a leg on the tub side for some (all the time squeezing Joe’s hand!). As the contractions intensified, I found it more difficult to change positions and to stand, but I did, and during the next contraction lost the mucous plug. At this point I was 7-8 cm dilated. I spent a bit longer in the tub, changing positions frequently, and rotating my pelvis between contractions. I focused on relaxing my muscles during the contractions and not resisting the pain and work that was occurring.

After about 2.5 hours in the tub we transferred back to the bedroom and Chris had me lie on my side on the bed, with one leg elevated. Joe used one hand to support my leg, and the other was for me to squeeze. I found all the helpful/progressive positions do more work and hence were more painful and difficult to face. But at that point all I could think about was that labor WOULD end, and faster if I allowed my body to make more progress. So I heeded Chris’ advice at every turn, but with a lot of whimpering. In this position I reached full dilation. Chris recommended that I try to pee then, so a full bladder wouldn’t interfere with the baby moving down. Throughout the entire labor I made a lot of noise and modified my breathing to help me get through each contraction. My instinct was shallow breaths and high whiny noises, but Chris and Joe helped me focus on more controlled, slower breathing and lower-toned noises. During breaks between contractions I often went into a meditative phase, with very slow yogic-breathing, to rest up for the next contraction.

During this time my contractions began to occasionally give me the feeling of being violently ill, with my stomach heaving and pushing uncontrollably. I hated this feeling, and was not yet ready to engage with it and push as well with my own strength. We returned to the bed and I laid my chest over the rubber ball, held onto the bed frame, and Joe supported me. Later, we learned it was during this time when our baby may have been a bit caught up in the pelvis, as progress was slow. In this position my water finally broke after I started to push with the contractions. I think it was during this time that I became pretty convinced I was not interested in going through labor again in the future, and let Joe know. After an hour and a half of labor on the bed/ball we moved to the birth stool, with Joe supporting me from behind. At this point my contractions slowed down a bit as the baby’s head descended and I rested and had sort of a deep meditation with very slow breathing in between. Chris coached me to let the contractions do the pushing here, as my body prepared for the baby to be born and gave me a chance to rest up for the delivery.

We switched positions to Joe sitting on the bed and me squatting between his legs. The contractions intensified again, with the feeling of involuntary pushing, and Chris coached me to add my strength and voluntarily push with this sensation. At some point I remember feeling the pressure of Chris’ hand against me, but when I opened my eyes I realized she was sitting a meter or so back from us, and it was actually the pressure of the baby’s head descending. With every contraction I was pushing with all my strength, hoping that the baby would be born and the labor would end. Yelling helped, despite the late hour (apparently the upstairs neighbors do not hear much of what happens in the Geburtshaus). Chris asked if I wanted to touch or see the baby’s hairy head that was crowning, but all I could focus on was that labor would end, and the part about the baby was too abstract to motivate me through the very visceral pain. Joe got to see the head with a mirror, as he was still supporting me from behind. It took several strong contractions and I felt the head go through, and quickly then the body, and Joe watched with the mirror. I looked down and picked up the baby to my chest. After a minute, I checked the gender, sure it was a boy, as I had thought through the entire pregnancy (we chose not to learn our baby’s gender from the ultrasounds). But it was a girl! Ginger Helene Smith was born at 00:37 on December 16, after about 12 hours of active labor. After a few minutes, the pulsing stopped in the cord, and Joe cut it. I delivered the placenta easily and intact, and labor was officially over. I went to the bed and held Ginger to my chest.

Ginger weighed 3610 g and 51 cm, and scored 10 on the APGAR, as a daughter of a Mount Holyoke College alum should (Dr. Virginia Apgar ’29 came up with this life-saving newborn index). Within a few minutes of being on my chest she searched out my breast and latched on. What a reward for the hard work of a spontaneous and drug-free labor and delivery! She had a large, blister-like swollen patch on her head, probably from getting a bit hung up through my pelvis while I labored on the bed/ball. We left the Geburtshaus as a new family around 4:30, just a few hours after Ginger was born, and it was clear she was a very healthy girl and I was in good condition.

Now, more than a week post-birth and Chris has been visiting us regularly, and it has been wonderful to have this support, as every day or two I have a new set of questions. Nursing has come very naturally, probably because Ginger is a champion sucker! We’ve even made progress toward sorting out her days from nights, although I would say it is quite far from a routine yet. One of the most amazing aspects for me is the bonding between mother and baby, and the intricate biological signals that underpin it. I don’t think I felt such a powerful bond in the moments just after Ginger’s birth, as I was still so overwhelmed by the power of the act of giving birth. But now, in those moments when I wake in the middle of the night and see her tiny sleeping body, or feel the milk filling a breast and knowing instinctively that she is ready for a feeding, I realize the power of our biology, hormones, and of love. In just a few moments, her body separated from mine, after nine long months of complete dependency. The chemical signals followed up to expel the placenta, the amazing organ that nourished her, but which was suddenly no longer required. And just like that Ginger was an independent being, breathing, eating and excreting under her own power. But I realize that we are still so connected in the intimate moments we share every day through touch and feedings, visual and vocal cues. It is amazing to finally be the ONE who can comfort an infant with a voice or a touch, and sense what she needs. I hope our bond will last for life, and that at despite it, at some point I will be able to release a strong and independent young woman into the world.

oder einfach per Mail an: info@geburtshaus-tuebingen.de 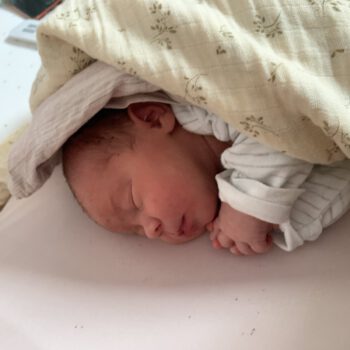 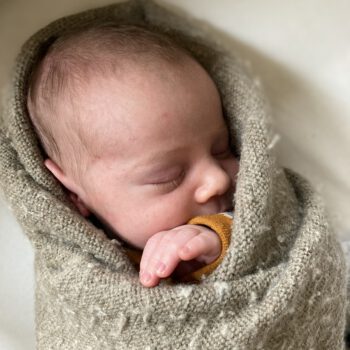 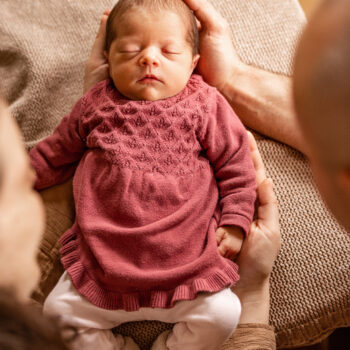